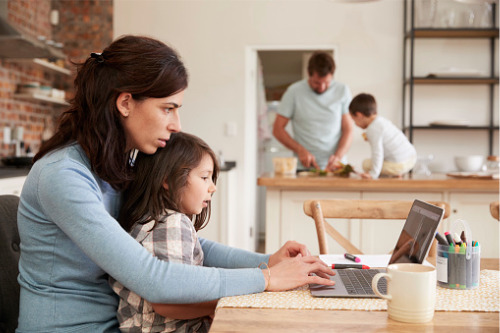 Hub International is being sued by a former employee, who claims that she was fired because her children made noises during business calls – something her superior allegedly called “unprofessional,” despite having to work from home due to the COVID-19 pandemic.

Rios – a former insurance account executive with Hub International since August 2019 – is the mother of a four-year-old and an infant. In her complaint against the insurance company, she said that due to the pandemic, she did not have any child care options available to her, so she was left to attend to her children while trying to work at the same time.

“I continued my normal duties as an account executive but now added two young children to the mix,” Rios said in a statement. “It was extremely difficult, but I managed to meet all the deadlines. There were some days where I had to work late to meet rush deadlines or any duties I couldn’t finish during the day because I had to care for both of my young kids at the same time.”

In the complaint, Rios said that her supervisor assigned her several tasks with short turnaround times, despite the tasks not being too urgent. She also indicated in the lawsuit that she told her supervisor that afternoon calls worked best for her, since that was when her youngest child was napping. However, her supervisor “continued scheduling calls during lunch times, when Plaintiff was feeding her children, nursing or putting her child down for a nap.”

Her supervisor overheard her children during these business calls.

Rios added in her lawsuit that her supervisor told her to “to take care of your kid situation.” She also said that she had to endure “sexist statements” from her supervisor, who she said was “motivated by a clear bias against mothers.”

She was later told to address her “time-management issues” with another supervisor. The lawsuit claimed that the supervisor accused of her being “defensive” and he said that he was “tired of accommodating” her. Rios was later fired on June 02, Hub International saying that her termination was due to the pandemic’s effect on its revenue.

A spokesperson for Hub International declined to comment on the case with ABC News.

In February, IBA put out a call for nominations for this year’s Elite Women list. Nominators were asked to provide details of their nominee’s achievements and...

Report – how has favorable pricing impacted reinsurance premium growth in...

Lockton Re unveils new unit with appointment of CEO